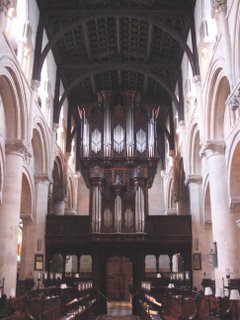 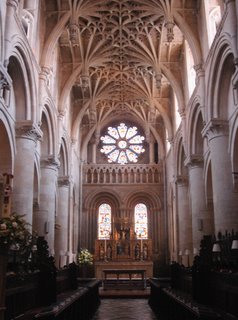 This morning I went to Christ Church for a tour. One of the oldest Colleges in Oxford, it was originally founded as a monastery to honor St. Frideswide, who lived on the site in the 7th c. The Cathedral was originally constructed in the 12th c...the tower is Norman and one of the oldest in England. Cardinal Wolsey ordered the monastery closed and torn down in 1525 so that he could found a college on the site. His dreams of a much grander college and church were never realised, only the west transept of the church was torn down and remains unbuilt to this day. In 1546, Henry VIII renamed the college and church which had become the Cathedral of the Diocese of Oxford in 1542 as Christ Church. The Cathedral remained a royalist stronghold throught the Civil war of the 17th c., and in 1720, John and Charles Wesley were ordained in the Cathedral where they had read for degrees in Theology as students of the college. The Cathedral Choir was founded in 1525 and remains one of the best choirs in England. I plan to attend Evensong one night, sung daily at 6 p.m.

While I was there today, it was very quiet. One of the elderly docents, a volunteer, grabbed me by the arm and asked if I wanted to see something special. Through a side door, up a small flight of ancient stairs, we emerged into a small walled garden. On the left was one wing of the main quadrangle, student and tutor accomodations. She told me that this was the garden that Charles Lutwidge Dodgson, otherwise known as Lewis Carroll could see from his window. (Dodgson was a Tutor in Mathematics at Christ Church, though he had been a student there as well...) The Dean of the Cathedral at the time had a young daughter named Alice. One day, Alice was out on the lawn playing with her pet white rabbit and the large orange tabby cat that lived in the garden. Girl, rabbit and cat suddenly disappeared through a tiny green door in the garden wall back into the Deanery. Inspired, Dodgson wrote "Alice's Adventures in Wonderland" in 1865 and a later volume "Through The Looking Glass" in 1872.
Posted by James J. Olson at 9:41 AM