The Duckie Is Toast

Ok, this is just silly. Clicking on the link below will take you to a website where you can virtually test the power of Kohler's new Class Five flushing toilets. (Who knew these things had a rating system?) I bet someone is tracking how many times the duck gets it. I wish I was clever enough to think of stuff like this.

I honestly do not know how many more of these stories I can hear before I snap. This stupid, illegal war is accomplishing nothing. I sat watching Bob Woodruff (himself badly injured in Iraq) report this story in tears. Our soldiers deserve so much more, beginning with the truth. Why a soldier sent home because he attempted suicide was not on suicide watch is just criminal. How many more stories like this will we hear? There was the young man who shot himself in Michigan or Minnesota because he couldn't get an appointment in time. How many have been permanently mentally damaged by five years of pointless combat? How many prosthetics? How many more have to pay the price for Bush's ego? The American people overwhelmingly want this mess in Iraq to end. 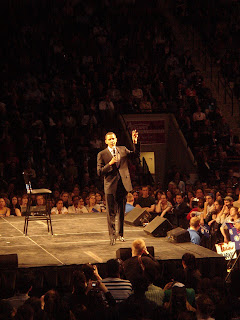 I'm convinced. We went to see Senator Barak Obama at a political rally and fundraiser at Boston University tonight. He was exciting. He said the right things. His vision of the way Americans need to take government and politics back from special interests is just right. We liked him.
Posted by James J. Olson at 10:24 PM No comments:

It's Not Just Imus

I am not under any illusion that MSNBC or CBS Radio had a sudden fit of moral fiber...most if not all of Imus' corporate advertisers pulled out, and apparently, a lot of the employees from both companies internally had a fit about this. Good for them, whatever the real reason. America is getting tired of the crap flowing out of their mouths. Even the outrageous television reality shows that have been popular lately are beginning to have waning ratings.

But its not just Imus. Media Matters details the racist, bigoted, homophobic and sexist things that other talk show hosts both on radio and television have been saying for years. Perhaps we have seen the beginning of a turning tide in our country. Imus still has freedom of speech, he can say whatever he wants. But he no longer has 65 radio stations and MSNBC backing up his hateful, vile speech. No matter what other good things he does, and there are several, his 'shock jock' style is going out of style. Thankfully.

UPDATE: The Sox handed Seattle their hinders on a platter this afternoon...14-2.

Josh Beckett gets the start, vs. the Seattle Mariners.

I'm so excited. Wish I was going...I'll just have to watch it on TV.