And then there were none... 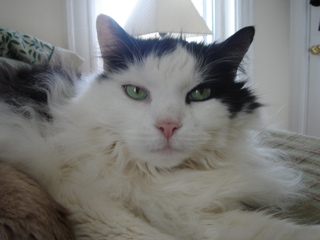 On Thursday, 11/15, Oberon left us and joined his 'sister' Diva in the next world.  For the first time in 20 years, there is no cat in my house.

Oberon was the first pet I ever owned as an adult.  Art and Jeanne Cooper, members of First Churches in Northampton where I was a member at the time had a cat with kittens.  Oberon was the last one left.  He was the roundest, furriest most adorable kitten I had ever seen.  He was only about seven weeks old.  I had no idea what I was doing...kittens are easy, right?  He was completely spherical when seated, with little furry ears and tail and enormous paws.  I originally named him Mabden, thinking he was a she...so little I knew of cats.  The vet thought this amusing.

I worked during the day, and I ended up having to leave him alone a lot.  He would come running to the door still half asleep when I got home.  He loved the laser pointer.  His purrer didn't work when he was very little, but one day, he purred and surprised himself.

Oberon was a complex cat.  At first, you'd think he wasn't very bright. But as you got to know him, his personality came out.  He wasn't a cuddler, though he did like a good ear scratch, and liked to be near us.  As he got older, he lost his interest in toys.  He and Diva were not littermates, but learned to tolerate, even like each other, and could frequently be found curled up sleeping together.  He was a handsome, beautiful cat, at his top weight more than 15 lbs, with a long, silky double coat.  Shedding season was epic, and he never really did like to be brushed.  He particularly did not like having to have the knots cut out of his underfur.  He particularly disliked the twice-annual bath he required to really keep his fur up to snuff.  He did not like going outside, even though with his huge webbed and furry feet he was clearly an excellent example of the Norwegian Forest Cat breed he was.  I can just imagine him bounding through the snow over the tundra, with his pride-mates, hunting wild reindeer in the forests of Norway...or not.

As he aged, and his hearing diminished, he became much more relaxed, and less of a 'scaredy-cat'.  He no longer jumped at the sounds of traffic.  At the end, he could even sleep through the noise of the vacuum cleaner.

A chapter of my life has passed.  The two cats that I've had all of my adult life, through over a dozen moves, graduate school three times, three churches and my marriage to Darrick are now both gone.  At the end, I knew it was time for Oberon, but was just not quite ready to let go, and, as with Diva, I probably kept putting off having him put to sleep too long.  The vet said that at 20, he had lived twice.

It seems, as we travel through this life, we collect griefs.  Our pets are just as much a part of our families as anyone else, and the hardest part is that we outlive them.  18 and 20 years is a good long life; there were several times over the years that I thought that Oberon wasn't going to make it, and somehow, he always did.  I suppose the balance is to collect just as many joys.  Oberon, in his secretive, sometimes skittish,  sometimes aloof way was a joy to have in my life.  I am so grateful for the years and years I had with both of them.  We will have cats again, and perhaps soon.  I think they would want it that way.

Elderly cat, dreaming
Whose world went silent long ago
Ears twitching in sleep as if they still heard
Every rustle, the can opener, his name.

Elderly cat, dreaming
Whose joints ache, whose legs are frail
Paws flexing in his dream world as if they still hunted
Mice and toys, the red dot.

Elderly cat, dreaming
House cat, fur unkempt and dull with age
In his dream world still sleek and agile
Startled awake by my footfall on the floor.

A purr, a blink, a struggle to get up.
His frail frame slowly, but inevitably headed the way of all flesh,
But first, some dinner?

May both of your puddies rest in peace and may you find more friends to cherish.