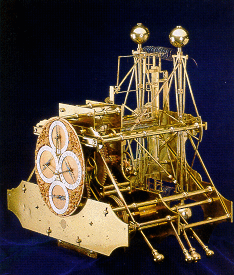 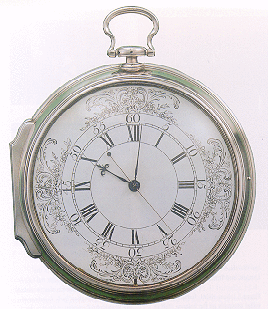 
This weekend, I travelled to London to visit my friends Hugh and Peter. I've been to London before, so I did not feel the need to do the usual touristy things, though, we did walk past Westminster Abbey (closed for a wedding) and into the Roman Catholic Westminster Cathedral. (I'll post pictures of those places later.)

What I did get to do was travel to the Royal Observatory at Greenwich, stand on the Prime Meridian (The line that separates East from West) and see the Harrison Clocks.

Before these clocks were invented, it was virtually impossible to know how far east or west you had travelled via ship. Latitude was easy to calculate, based on measurments of the stars, sun and moon. Careful observation by astronomers had produced very accurate tables so navigators could easily know how far north or south a ship was. But Longitude, the measurement of east and west was much more difficult. It required a clock that would keep very accurate time on the rugged conditions of a moving ship. (You can read much more about this on the Royal Observatory web site.)

I saw a movie based on the life of John Harrison on A&E several years ago. I had learned about the Harrison Clocks at Maine Maritime Academy, of course, when I was learning navigation. But the story behind their invention and the utter elegance and beauty of the clocks was not apparent to me until I saw this movie. Since then, I have wanted to visit the Royal Observatory and see them.

All four of Harrison's clocks now reside in a large gallery at the old Royal Observatory. They are part of a much larger, very, very interesting exhibit about time, clocks, and how the scientific work of the Observatory has made the world a safer and better place.

They are stunning, and they all work. H1 is the most elaborate and interesting to look at, H2, is a smaller version, and just as interesting. H3 has a different mechanism, and was ultimately proved to be too inaccurate, though Harrison learned enough to create H4, which really looks just like a large pocket watch...not so interesting to look at, but arguably the most important chronometer ever created. It was easily manufactured. It would take a beating and keep very accurate time. It is what assured that England would rule the world in the 17th and 18th c., and virtually eliminated ocean disasters based on navigation errors.

On the day I visted, all four of the clocks were accurate with each other to within one second, something the curator was happy to point out to us. They had once fallen into disrepair and were discovered in the middle of the 20th c. stuffed into a back closet. After restoration, they have become some of England's greatest national treasures. It was truly wonderful to sit and listen to them tick...H1 in particular has a sublimely complicated mechanical sound. I'm glad I climbed up the fairly steep hill to the Observatory to see them.
Posted by James J. Olson at 1:02 PM

Hi Jim,
Finally caught up with your postings, and it sounds and looks like you are having quite the time! The more you write the more jealous I get of your travels. Thanks for writing engagingly and sharing the pictures of spectacular beauty!